Disclaimer: The topic of vacuum, especially in the context of thermodynamics, is difficult to begin without some substrate upon which the discussion can be developed. For this reason, the concept of vacuum doesn’t appear immediately, but is certainly the focus of this entry. 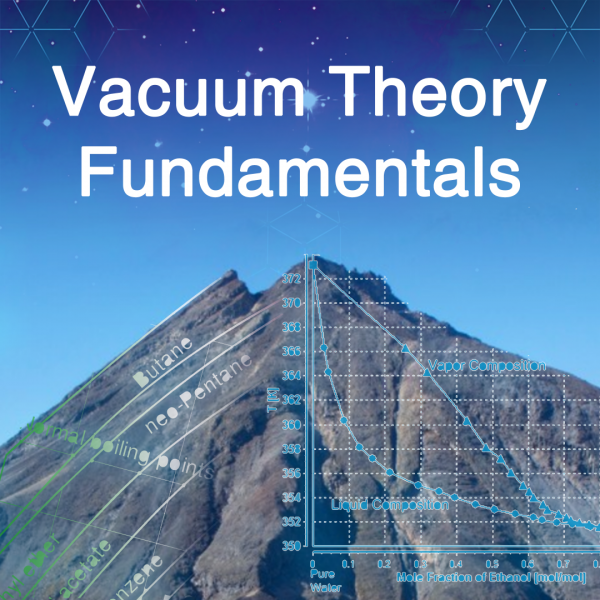 The manufacture of a quality canna extraction can be roughly approximated in three steps:

Each of these steps can be further simplified in the context of thermodynamics. In this case, the cannabinoid-rich fluid is a system, and the variables of temperature and pressure are being manipulated to influence the nature of the system. Interestingly, the complexity of the thermodynamic manipulation increases with each step. For example, step one is quite simple: keep the temperature low, the pressure is irrelevant (the reason behind this is outside the scope of this conversation, but the author promises its relatively simple).

Step two is a bit more complex. In this step, one can make a general assumption that there are two components—i.e. a solvent and a crude extract—and that when temperature is increased, they are successfully separated; the solvent becomes a vapor, which can then be cooled into a separate vessel as liquid. However, instead of a single vessel with a uniform temperature throughout, as in step one, one is presented with a fractionated vessel that separates regions of hot and cold, vapor and liquid—and to further complicate the issue, changes in pressure will alter the nature of the separation! Imagine now, a complex mixture of hundreds (perhaps thousands) of components, in which pressure must be manipulated along with temperature to successfully separate the constituents into a workable end-product—this is step three.

So, how does one simplify a separation with a near-endless number of variables and components?

A better understanding of the associated thermodynamics.

The purification of a multi-component mixture (containing much more than two constituents) can be regarded in the context of three physical properties: vapor pressure, relative volatility, and boiling point. Interestingly, none of these three properties can be explained without an involving the other—they are inextricably linked. However, it is most simple to present them in order of mainstream familiarity, and since boiling point being is the most recognizable of the three, it’s a good place to start. 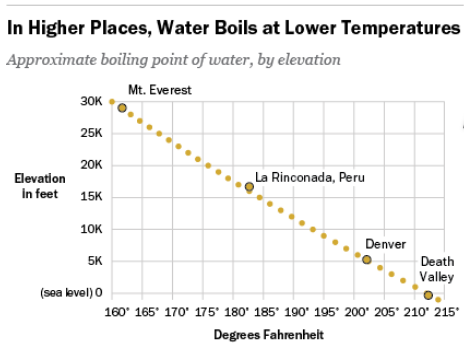 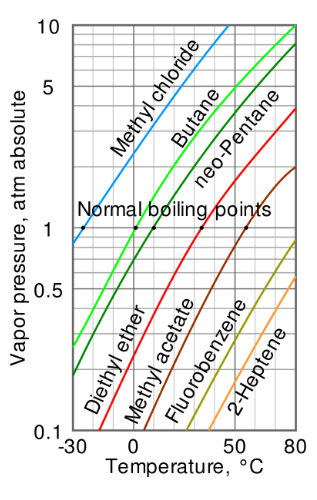 In this case, the boiling point of all these liquids is 0°C, but their vapor pressures are 1 atm, 0.7 atm and 0.25 atm, respectively. The importance of this property is that it can be mathematically modeled (as the Antoine Equation)—so that, at any temperature, the vapor pressure of a substance can be identified. Moreover, with the knowledge of a substance’s vapor pressure, one can determine how much vacuum to pull on a system and how much the system should be heated—this has major implications on the cost of a separation.

Relative Volatility then is a synthesis of the two preceding concepts. Specifically, in a system of two pure components, at a fixed temperature and pressure, it is a measure of the likelihood of one component to boil, versus another. The equation in Figure 3 is the most basic mathematical representation of relative volatility, where i and j are the components, and y and x are the vapor and liquid concentration of these components at equilibrium, respectively. Moreover, this equation is a function of temperature and pressure, so that the value of alpha at any given temperature/pressure will vary. The utility of this equation is endless, and it is the essential basis for large scale distillation—indeed, it is the basis of design for petroleum distillation, which is among the most complex and costly processes on the planet. A discussion of relative volatility, to the extent that it can be used as a basis of design is far beyond the scope of this entry, but its value as a fundamental quality of mixtures should not be disregarded.

So, how do these thermodynamic concepts relate to the improvement of a canna extraction process?

They are the foundation for understanding the importance of vacuum pressure.

Bringing It All Together: Vacuum Pressure

An equipment manufacturer might present the example of 100 moles of ethanol at two different pressures, one atmospheric, one at a vacuum pressure—as in system 1 and system 2 below:

At first glance it seems that the cost of boiling ethanol is reduced (in this example by 800%) when using a vacuum pump. However, this example leave out a crucial detail (explained thoroughly in Heat and Mass Transfer 101); when a pure component is boiled, there exists a Heat of Vaporization (Hvap) which increases as pressure decreases. In this way, the reduction of heat required to reach the boiling point at vacuum pressure is counteracted by the increase in Hvap to the extent that it requires more heat to boil solvent at vacuum pressure than at atmospheric pressure. Often, the author has encountered equipment manufacturers that guarantee cost-reduction because of the incurred heat reduction, but this is an absolute falsity. The real importance of vacuum pressure generation in a solvent evaporation system is the reduction of the boiling point temperature of the solvent and the incongruence of relative volatility changes between desirables and solvent. This may seem a bit unintuitive at first, so let’s delve deeper.

To begin, let’s revisit the concept of relative volatility; at a given temperature and pressure, in a mixture of components, some components will evaporate easier than others. For instance, at room temperature and pressure, ethanol will evaporate easier than water, but as pressure and temperature are reduced to another set of values, does this statement remain valid? Not Always. In fact, as temperature and pressure vary, the relative volatility of multi-component systems switches almost erratically—the only way to be certain of the volatilities between components is careful, analytical experimentation. This seeming inconsistency in the concept of relative volatility has been the focus of many millions (perhaps billions) of dollars of research over the past century, especially in the field of petroleum distillation. However, given the relative infancy of canna extraction, and the lack of well-developed, peer-reviewed data, the only option is to compile reliable information from within the field and try to establish a theoretical background from which deeper experimentation can take foot.

So, with this information in mind, one can revisit the statement that, generating vacuum pressure leads to: “the reduction of the boiling point temperature of the solvent and the incongruence of relative volatility changes between desirables and solvent.” This statement suggests that when vacuum pressure is generated within a system, the boiling point of the solvent is reduced, and that the relative volatility of desirable components modulates in a way that they are retained in the cannabinoid-rich fluid and not the solvent. This truth is not intuitive, but has been demonstrated time-and-again by successful extractors; individuals utilizing vacuum pressure have consistently yielded a more desirable end product, aromatics are retained, cannabinoids are not degraded by heat pockets forming in the viscous extract, and there is a lack of scorched constituents—in essence, an atmospheric distillation leads to a sticky, burnt, smelly end-product, while a vacuum-distilled product is malleable, clear, and usually a pleasant-odor.

In this regard, there is no canna-specific data on which to rely—instead, there are examples of this phenomena in more well-developed industries. Take, for example, gin distillation which has utilized vacuum-distillation as a method for “preserving volatile aroma chemicals important to the organoleptic [taste, smell] attributes…as well as the degradation products generated during…traditional methods…of distillation”1. In other words, the use of vacuum-distillation was a means of avoiding the typical loss of aromatic compounds and avoiding the typical loss due to scorching and heat-degradation, when using atmospheric distillation. All of this to say: the purpose of vacuum-distillation is not to save on costs, it is an absolute requirement for retaining the desirable components of an extract, of which taste and smell are nearly as important as cannabinoid content.

Ultimately, this discussion of the foundational parameters of vacuum pressure should demonstrate that generating vacuum in a system is helpful for 1) reducing the boiling temperature of the solvent, and subsequently 2) ensuring that desirable chemicals are not scorched or siphoned in the solvent, but remain in the cannabinoid-rich fluid. These concepts may still seem a bit underdeveloped, but a fuller understanding requires an exploration of the atomic level interactions that dictate the realities of boiling point, vapor pressure, and relative volatility. We’ll save that topic for next time…