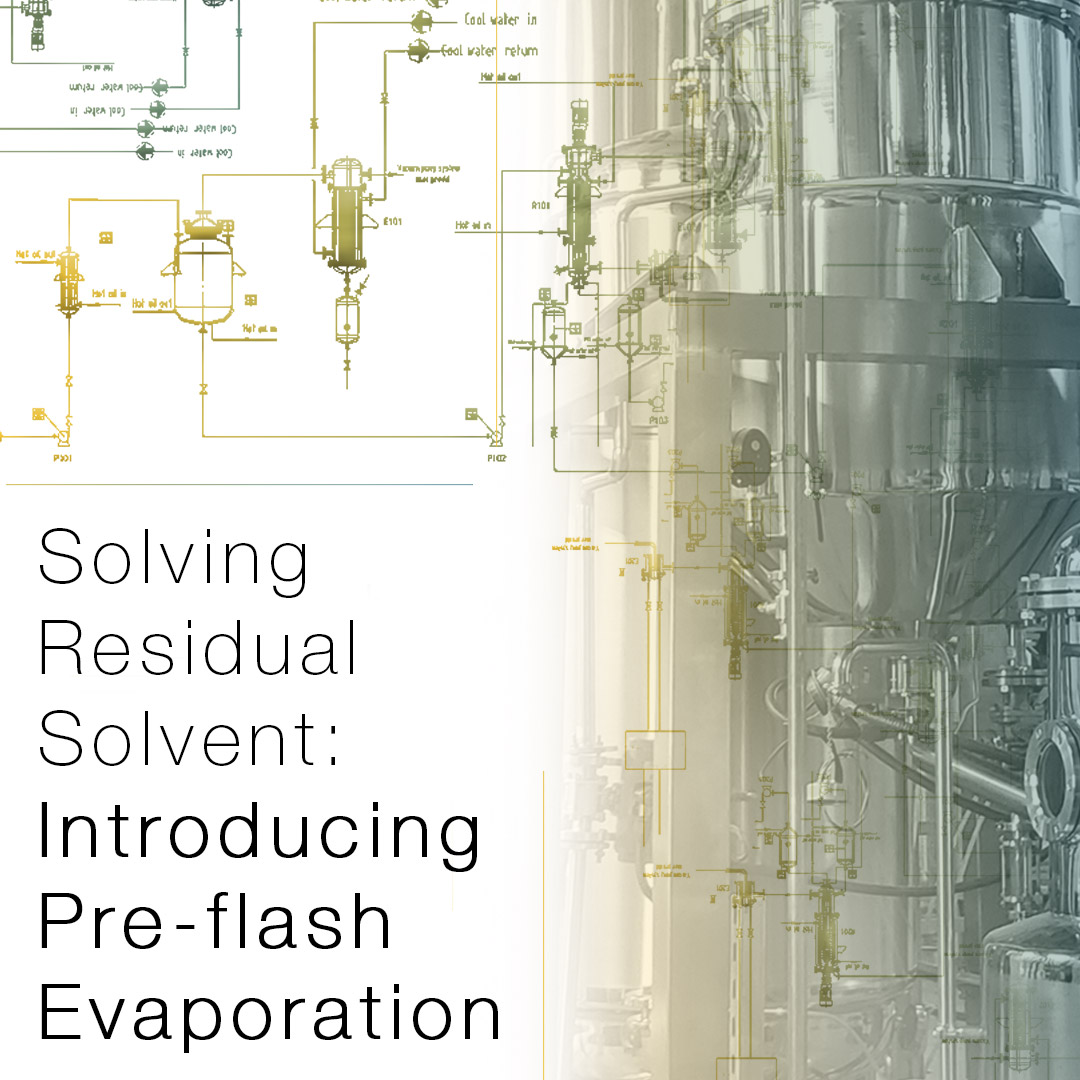 As part of our core pursuit to drive efficiency, we often seek to integrate new inline processes. Today we want to highlight an element of our approach we are terming “Pre-flash.” The primary science for this process, flash evaporation, is well established and frequently used in chemical manufacturing industries. Using this method, our clients enjoy an increase in the efficiency of their distillation stages. Let’s look at why and how.

Following primary solvent recovery, and even after decarboxylation, many processors still have residual solvent in their crude.This is an especially prevalent problem for extractors utilizing ethanol or heavy alkalines for their extraction solvent. When this crude goes into the distillation phase, trouble begins. Solvent generally has a lower vapor pressure than the compounds processors are trying to separate, and often has a higher ratio of gas phase volume to liquid phase volume than the target compound. As a result a substantial solvent vapor load is released in the first pass of distillation, which taxes the vacuum and makes the entire process less efficient. The substantial volume of vapor released from even a few percent of residual solvent can make it impossible to effectively remove the terpenes and other light aromatic compounds typically targeted in first pass distillation.

This well-known problem is currently solved in the field in a couple of ways. Some may choose to take the hit in efficiency and resulting potency of the final distillate. For instance, processors making isolate might not at first be bothered much by this decrease in output potency. Over time however it will become clear that the losses in efficiency do still amount to higher operating expense in the long run. Each crystallization operation will generally see a reduced maximum output proportional to the reduction in potency of the input material. For those that are concerned, a popular method is to leave the crude in the decarb stage longer or at a higher temperature, increasing the total residence time and potential for heat induced degradation to the product. With our goal to create inline, continuous, and highly efficient processes for our clients, we wanted a more elegant solution.

The science behind flash evaporation is simple: higher vapor pressure compounds evaporate out of a mixture when the mixture experiences a rapid drop in pressure. In flash distillation a mixture is typically heated in one section of the system, such as a heat exchanger, before being pumped into a lower pressure chamber where the sudden pressure drop induces evaporation. Under most circumstances the quicker that a pressure drop is experienced by the mixture, the more effective the evaporation will be, so orifices such as small adjustable aperture throttling valves or spray nozzles are used to inject the liquid stream into a vacuum chamber. The extreme drop in pressure vaporizes some of the fluid. The evaporated compounds go overhead to be condensed in an external condenser, and the residue drains to the bottom of the vessel or is pumped on to the next stage in the process. The reason this process is referred to as "flash" evaporation is because the vaporization happens fast, right after the liquid goes into the vessel.

In our approach, a jacketed flash evaporation vessel under vacuum is used after the decarboxylation stage. The crude is “sprayed” into the vessel. The advantage of the Pre-flash approach becomes clear as the residue is pumped to the first stage Wiped Film Evaporator, resulting in a continuous, in line operation that only introduces desolvated crude and is easy to manage with our integrated PLC. This addition provides another line of assurance to operators. The goal is to remove all, or nearly all, solvent. In total, we estimate this preflash stage is able to remove 5%-7% of undesirable compounds by weight. As mentioned, in addition to solvent this is a good way to remove other compounds such as monoterpenes from the mixture prior to deeper cuts of distillation in the following wiped film stages.

The Preflash stage approach is just one way SciPhy Systems is striving to increase the efficiency and decrease the operating expenses of clients' facilities. Interested in discussing how we can help your team? Click Here to Talk to Us Today.

If you enjoyed the article please consider sharing on social, and